Thrash In The Heart 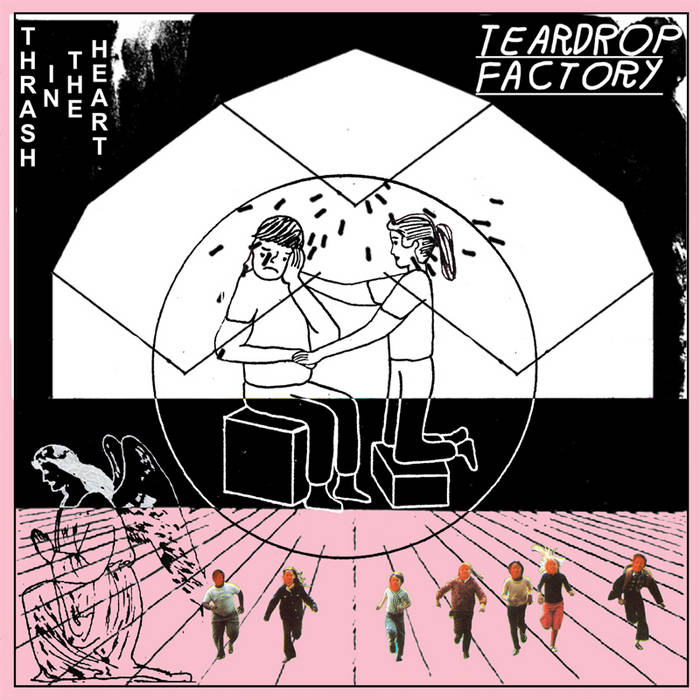 Teardrop Factory's debut album, 'Thrash in the Heart', falls into existence in a swirling haze of broken sleep, streams of consciousness and teen despondency.

Tina Muat and Andy Ward assumed a number of roles in the creative process of Thrash In The Heart, from committing their ideas to tape using a four track recorded before rummaging through each recording to flesh out the ideas into perfectly formed, fuzz-laden dreamscapes, to creating a matching aesthetic for the album’s artwork, videos and press shots.

“It took us two solid weeks to listen back to all our old 4trk demo tapes with the intention of making them into an album. Days blended together, video games, guitars, and channel surfing in a daze of sleep deprivation. When it was over we had 13 new songs and the bare bones of the album which chronicles this writing process.”

Lead track, '3am Coke Dream' is the album's prelude; an immediate lo-fi number that bursts into life with a menacingly addictive hook. The track highlights the entire creative journey, setting the tone for the record both literally and musically. 'Deeper + Deeper' is a blissful, swirling sinkhole of static that takes the pace of the record down a notch but loses none of the endlessly satisfying fractured fuzz that ties the album together. 'Now We Shatter' injects the urgency back into the fold leading up to the frantic cacophony of the climatic, 'Superimposed'. The slacker-fi is laid on thick for wonderfully lazy album closer, Fake Tan, which fades out into nothing.

Made at home by the band and recorded in their bathroom, then mixed with Julian Tardo (Church Rd Studios / Bowlegs) and finally, mastered with MJ (Hookworms) at Suburban Home. 'Thrash In The Heart' will be available via Faux Discx on September 15th.

Bandcamp Daily  your guide to the world of Bandcamp